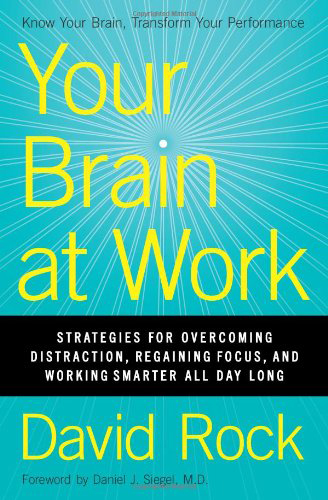 “Simply put, this intriguing book offers fascinating research about the brain’s functions, limitations and capacities, and it teaches us how we can “direct” our own brain chemistry in order to achieve fulfillment and success. Well worth reading and ingesting these skills.”

Stephen R. Covey, author, The 7 Habits of Highly Effective People and The 8th Habit: From Effectiveness to Greatness

“This is the best, the most helpful, and the brainiest book I’ve read on how the brain affects how, why and what we do and act. After reading only the first four chapters, I felt roughly 100% more efficient in organizing my work and personal life.”

Warren Bennis, Distinguished Professor of Business and University Professor, University of Southern California and author of 'On Becoming a Leader'

“This book will improve how you work – by showing you how your brain works!”

Marshall Goldsmith, the million selling author of 'Succession Are You Ready?' and 'What Got You Here Won’t Get You There'

“David Rock is just the right guide for bringing the brain to work.”

“If you have no interest in being creative, effective and happy, then ‘Your Brain at Work’ may not be for you… but for everyone else, it’s a must read!”

“David has accurately integrated recent neuroscience findings into the business world. These findings provide insights into how to drive change in the brain and improve performance.”

Meet Emily and Paul: The parents of two young children, Emily is a newly promoted executive in a large corporation, while Paul has his own business as a consultant. Their lives, like all of ours, are filled with a bewildering blizzard of emails, phone calls, yet more emails, meetings, projects, proposals, and plans. Just staying ahead of the storm has become a seemingly insurmountable task.

In this book, we travel inside Emily and Paul’s brains as they attempt to sort the vast quantities of information they’re presented with, figure out how to prioritize it, organize it and act on it. Fortunately for Emily and Paul, they’re in good hands: David Rock knows how the brain works—and more specifically, how it works in a work setting. David shows how it’s possible for Emily and Paul, and thus the reader, not only to survive in today’s overwhelming work environment but succeed in it—and still feel energized and accomplished at the end of the day.

YOUR BRAIN AT WORK Explores:

Order Your Copy Today
The Author

Dr. David Rock coined the term ‘Neuroleadership’ and is the Director of the NeuroLeadership Institute, a global initiative bringing neuroscientists and leadership experts together to build a new science for leadership development. With operations in 24 countries, the Institute also helps large organizations operationalize brain research in order to develop better leaders and managers. Learn more at davidrock.net.

The NeuroLeadership Institute is a leading global research organization and the pioneer of bringing neuroscience to leadership. Since its inception the Institute has united the world’s foremost neuroscientists, leadership researchers and organizational practitioners with the purpose of transforming how we think, develop and perform. Visit us at neuroleadership.com to learn about our consulting work and educational programs.
Available Now