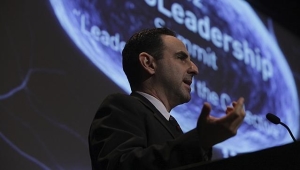 NeuroLeadership expert David Rock believes companies are going about staff management entirely the wrong way. In fact, the man who helped kick-start the international trend of applying brain science to the workplace is partial to abandoning performance management and forced ranking altogether. “You can’t have a coach who is also the judge. It doesn’t work. But organisations completely ignore that,” he says.

Rock, the keynote speaker at the Asia Pacific NeuroLeadership Summit to be held in Sydney from June 19 to 21, co-authored the first paper on neuroleadership in 2006, earned the first doctorate in the field and co-founded the NeuroLeadership Institute. His talent is translating dry academic studies into layman’s terms and seeing where brain science is relevant to management.

In a lengthy chat over the telephone from Boston airport, he tells The Australian Financial Review the most important work his institute has come up with is the SCARF model – status, certainty, autonomy, relatedness and fairness – which identifies five key areas that academic studies have shown to create surprisingly strong threat or reward responses in people. “If anyone attacks your status, you react as if your life is in danger,” he says.