Why Everyone Hates the Boss

Why Everyone Hates the Boss 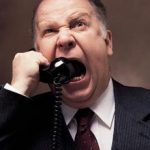 We hear people going on tirades about their bosses all time. Whenever a group of coworkers go out to eat, it’s a safe bet their boss will be a hot topic of conversation. One of the most common complaints about leaders is that they are promoted for their technical skills, despite the fact that they often have poor social skills. However one of many big insights that emerged on day two of the 2011 NeuroLeadership Summit is that this may simply be a function of a leader’s role.

UCLA professor Matthew Lieberman, one of the founders of the Social Cognitive Neuroscience field, presented research on our ability to mentalize, or predict other people’s emotional or intentional states.